Most waterfalls are beautiful and therefore, they are an irresistible subject for photographers. At first, they can be challenging to capture, but the good news is that great results are actually fairly easy to achieve when keeping some guidelines and tips in mind.

1. Don’t Get Caught Without this Essential Gear

Other than your camera and lens, there are three main elements that I consider essential gear in photographing waterfalls:

2. Use the Right Lens

A good wide angle lens is generally a go-to because many waterfalls are shot from clearings at the base of the falls and you want to be able to try to get as much as possible in the frame convey the surroundings. However, don’t underestimate the need for a mid-range or even telephoto lens. You might be limited with how close you can get to a waterfall or maybe you have a different composition in mind. Depending on the location, a longer lens might be necessary so try to do your research an investigate what you might need before heading out to the waterfall. Make sure to be prepared. 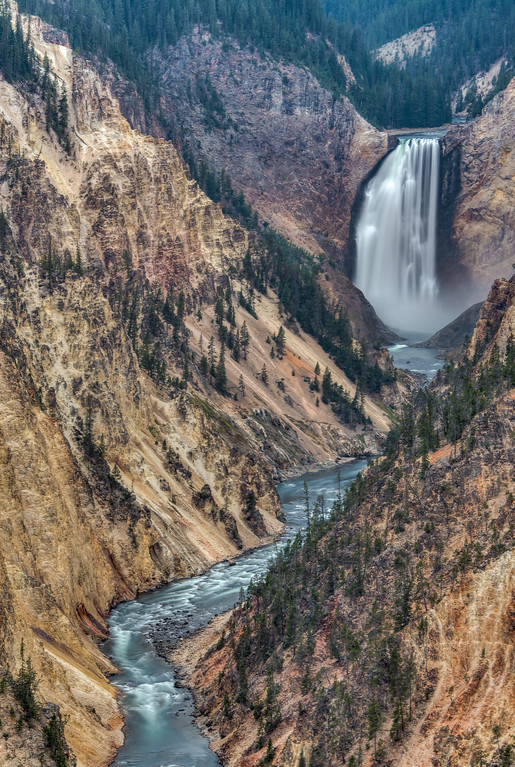 Shot from Artists Point in Yellowstone National Park, a telephoto lens was used (112mm) since the point was so far from the falls.

3. Work with the Water’s Movement to Determine Shutter Speed

Proper shutter speed is the key element to a good waterfall shot because you can use it to either capture or convey the motion of the water. When I first started photographing waterfalls, I thought that longer shutter speeds always made better images, but I’ve since learned that I was completely wrong. Not only were there times where my waterfalls would appear as detail-less blobs of white, but those longer exposures simply didn’t capture the waterfall in a pleasing way.

You really want to try and read the waterfall and think about what result you want in the final image you’re trying to create. Is it a raging waterfall where capturing the power in a frozen image would be impressive or is it a smaller and calmer trickle of a waterfall where displaying the silky motion would be more compelling? For most waterfalls, 1/2 sec shutter will convey the silky motion of the water and the longer the shutter stays open, the more silky the flow becomes. These days, I find that I can get the job done with shutters between 1/25 (big falls) to 6-seconds (smaller, stringy falls). It doesn’t happen often, but for truly powerful falls, I’ll switch over to a very fast shutter to really capture that power.

In order to achieve these longer shutter speeds, it’s always best to shoot during the golden hours (around sunrise/sunset) or when it’s cloudy. (Remember that if you’re shooting when it’s cloudy, try not to include the unpleasing gray sky in your composition!) A neutral density or polarizing filter should also always be in your bag when heading out to waterfalls.

A 1.6-second shutter was used at Kuang Si Falls in Laos in order to create a silky movement of the water.

4. Pay Attention to the Other Important Camera Settings

I think the shutter speed is the most important setting when photographing waterfalls, but like all landscape photography, I think it’s a good idea to try and shoot in manual mode so you can set the shutter speed (above) while keeping your ISO as low as you can (ideally ISO100) and setting a smaller aperture (f/11-ish) that will maximize the depth of field. Make sure to shoot RAW files to give yourself more data to work with in post-processing.

5. Beware of the Surroundings

Make sure to keep the surroundings of the waterfall in mind as well. If you’re using a longer shutter speed to capture the silky water, elements surrounding the waterfall may also become blurred from movement. Even with the slightest breeze, the leaves of the trees and vegetation will move so to combat this, you can try blend 2 shots together where you take one image where you use a longer shutter to blur the falls and then another with a quick shutter to to freeze the leaves.

You also want to watch for distracting elements such as powerlines, pipes, garbage, ect… and try to keep them out of the frame.

I had to be careful with the angles I was photographing Rifle Falls in Colorado at because the water was actually coming out of pipes and there was fencing along the top ridge. Not too pleasing to have those elements in an image…

Looking at a beautiful waterfall, it can be hard to remember that you still want to try to include a foreground as well for a more compelling image.

I only had a wide angle lens (16-35 mm) on me at Waimea Falls on O’ahu and since I couldn’t get in tight on the falls, I couldn’t get a pleasing composition.
Instead, I got down low and included a foreground (that rock…) into the image.

I’ve mentioned using filters a couple times now when photographing waterfalls. Again, you’ll want to use a circular polarizer because all waterfalls involve problems with reflections, highlights, and brightness. A circular polarizer will help minimize highlight blowouts and reduce those reflections. And the neutral density filter will help neutralize the light hitting the sensor and allow for longer exposures. It’s still ideal to try to shoot without an ND filter by timing your shoot with sunrise or sunset, but if that’s not possible, the filter’s your next best bet.

When needed, particularly with darker jungles, I have actually found some good success bracketing images while photographing waterfalls. I was initially nervous because of the moving elements, but since running water is fairly uniform, HDR blending can work seemlessly, as long as the trees and vegetation aren’t moving in the scene as well. If you’re having issues capturing the dynamic range of the scene, give it a shot.

Like anything in photography, photographing waterfalls takes practice and experimentation, but on the plus side, any images of waterfalls are usually pretty pleasing. Many of these principles can be applied to rivers, lakes, and beaches as well. 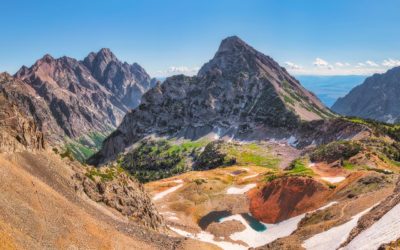 After a pretty spectacular sunrise at Lake Solitude, we trudged up the 2 miles and the 1600 feet and across the Paintbrush Divide. 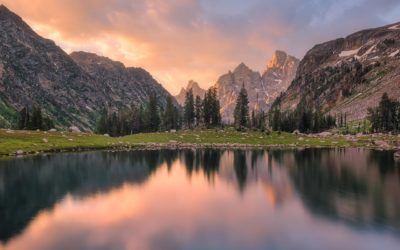 The problem with this Paintrush-sunrise plan was that I really did not want to get up at 3 a.m. to hike this section alone and everyone else in my group thought I was straight crazy for thinking that this was a good idea.

After a beautiful sunrise atop Hurricane Pass along the Teton Crest Trail, we dropped into the South Fork of Cascade Canyon to try to hunker down out of the wind and wait for the rest of our group to catch up.